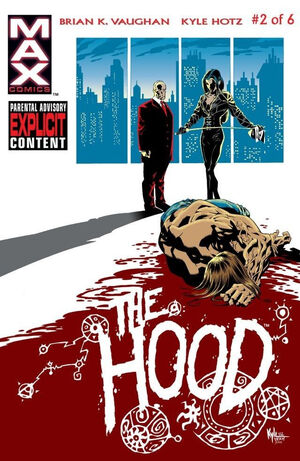 Thrilled by his new discovery, Parker headed over to John's apartment to show him what the boots could do. While there, they argue about John's drinking problem, and John punches Parker in the gut, knocking the wind out of him, and making him disappear. John was relieved to find that Parker had only been made temporarily invisible while holding his breath, since he originally thought he had blown him to bits.

Across town, The Golem had Mosh brought to his office, to ask for a percentage of the take Mosh had robbed from a liquor store under Golem's protection. When Mosh laughed it off, Golem had Madame Rapier kill him.

At a nearby gym, Parker tried out the hood by holding his breath in the women's locker room, and told John the exciting news once outside. John knew exactly how to apply these new abilities, since he'd heard there was a shipment of black market diamonds coming in down at the docks that night.

Back at Golem's office, he interviewed Constrictor, Shocker, and Jack O'Lantern to escort Madam Rapier and his incoming shipment of diamonds to him from the harbor.

Retrieved from "https://heykidscomics.fandom.com/wiki/The_Hood_Vol_1_2?oldid=1433909"
Community content is available under CC-BY-SA unless otherwise noted.