Start a Wiki
Part of the 'The Kingdom' event 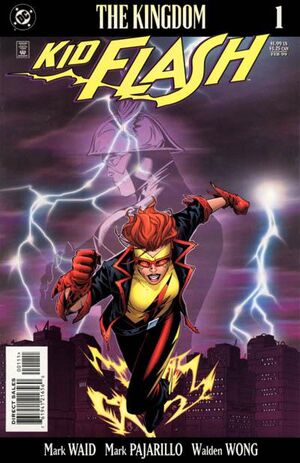 Why bother? If I've got one day left, by God I'm gonna waste it as I see fit.

Iris West, the daughter of Wally West (the Flash), wants her father to recognize her as a hero of worth, and so adopts the identity of Kid Flash. However, her father is more interested in seeing her brother Barry take on the role of the superhero, despite his desire to do nothing but plant his rear end on the couch. Iris was doing rounds as a deliverer of a Meals On Wheels program when she is interrupted by a message Barry gives to her from her father: that Superman, Batman, and Wonder Woman are on a mission that could endanger the existence of the future reality they live in by the end of the day. While Barry decides to use that final day to indulge himself in his own desires, Iris chooses to use her powers for the purposes of helping others. She eventually decides to join Nightstar and her group in order to attempt saving their reality from nonexistence. Barry tells his father where Iris went, suggesting that she is looking to do something other than trying to impress him. When Barry calls Iris a "fruit fly", Wally tells him not to call her that, but that "her name is Kid Flash."

Retrieved from "https://heykidscomics.fandom.com/wiki/The_Kingdom:_Kid_Flash_Vol_1_1?oldid=1443416"
Community content is available under CC-BY-SA unless otherwise noted.