Part of the 'The Kingdom' event 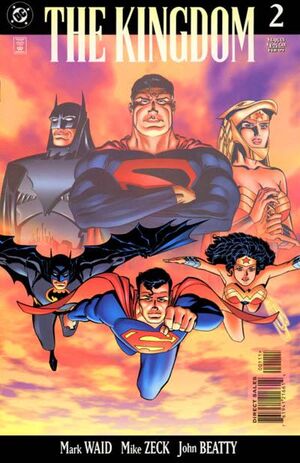 In 1998, Superman sees on TV reports of a nuclear blast in Kansas, and so travels there to find Captain Atom being attacked by Gog, who then turns his attention on Superman, expecting his arrival. Unable to stop Gog, Superman sees that his future counterpart as well as that of Batman and Wonder Woman have appeared on the scene. After Superman of the present summons his counterparts of Batman and Wonder Woman, the future team tries to let the present-day team know why they're here, and so offer their help to at least rescue Superman's child from Gog. But as the future era Superman and Wonder Woman see their child apparently "disappear" into "nonexistence", the latter of the two now seeks vengeance against Gog. Hunter appears and transports the heroes into Booster Gold's Planet Krypton restaurant in the present, where Hunter's other allies from the future era await to help. Hunter transports the entire restaurant into Hypertime, but Gog soon joins the heroes in battle, in which they engage him using all sorts of weapons found in the restaurant collected from all sorts of realities. Gog blasts the present-day Superman through a wall before he finally falls, causing the heroes to be sucked out into Hypertime, which they realize is the secret Hunter's been trying to hide: a multitude of alternate realities, which the future era heroes realize they are a part of. A figure resembling the Phantom Stranger, who turns out to be the older version of Superman and Wonder Woman's child, gives his infant self back to his parents, safe and sound. As the Superman, Batman, and Wonder Woman of the present time are sent back to their own reality, the remaining heroes take Gog to the Quintessence in order to have them deal with their agent.

Meanwhile, the Superman seen pounding at some barrier over the sky of his Metropolis now finds out the barrier is gone. He can now fly beyond the sky to whatever is past the barrier. He gives a wink to the reader, suggesting that someday he will.

Retrieved from "https://heykidscomics.fandom.com/wiki/The_Kingdom_Vol_1_2?oldid=1477489"
Community content is available under CC-BY-SA unless otherwise noted.