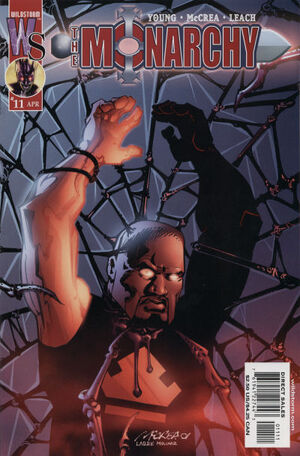 Appearing in "The Idiot's Guide to the End of the World, Part 2 of 3: Bellerophon"Edit

Synopsis for "The Idiot's Guide to the End of the World, Part 2 of 3: Bellerophon"Edit

In the Imaginary States of Amerika, an Adult 'Happy' Hank Bendix has just wiped out The Fevermen with the aid of Lith, a woman who seems to be linked to Colonel Carin and Pannacia. As they leave the Charnel house that held The Fevermen behind, they talk of how Hank was once a master of paranoia and covert espionage, but now he operates in the weirder places, behind the scenes, and that suits him fine. As they return to Pannacia, they come near Jackson King's psychic head.

In Kansas, as Malcolm King rejoins The Monarchy, Agent Morro cannot believe he's been played for a fool. A psychic recording left by King explains that what happened at the Bureau for Post-Human affairs was just to lure someone like him to the scene, to hide their blueprints for the future inside his mind. Addie Vochs sings to him as they all teleport away.

Back in Philadelphia, Christine is still telling her story to Matt, when they are interrupted by his mother and a 'friend' who is sleeping over that night. Matt is obviously used to this, and tired of it, but he is also amazed that they didn't spot Christine. She returns to her story, telling Matt about the Dragline.

Back in Panacia, Hank and Lith retrieve King's head, and prepare to travel to The Crown. After Hank has a little fun at King's expense. The rest of the Monarchy have adapted the blimp Christine captured to travel through The Bleed, and attack Chimera.

In the ruins of The Crown, Hank attaches King's head to a device that surges energy through it, as it brings King back to life. He explains how important he was in recruiting King for the cause, and how he and The Doctor were responsible for what happened on The Carrier. When King is revived, he gathers up a series of rainbow-coloured shards, forging them into a sword, and he, the "puppy" (Fenris) and Hank prepare to "go to work."

Retrieved from "https://heykidscomics.fandom.com/wiki/The_Monarchy_Vol_1_11?oldid=1455394"
Community content is available under CC-BY-SA unless otherwise noted.