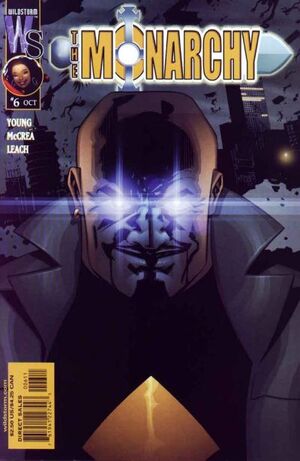 Appearing in "Making the Metropolitan, Part 1 of 4: Towing the Drag Line"Edit

Synopsis for "Making the Metropolitan, Part 1 of 4: Towing the Drag Line"Edit

Long Beach, a group of homeless people gather by the 405 Freeway to "smoke a bowl" As they do, one of them tells of the Tungva Tribe, who believed the very field they are in was the birth-cradle of their god. As we see the scene from above, there is a nazca-like collection of lines on the ground that form a shape when seen from a distance, in this case a long-haired man being struck by arrows.

Salem, Massachusetts; The Monarchy are hard at work defeating a poltergeist infestation that Jackson King clearly has no time for. Most of them are destroyed by King, Farmer, Union and Professor Q, and the rest are shunted back to their home dimension by Farmer.

In Los Angeles, the costumed vigilante Last Angel is trying to stop two thieves from making off with a car, but as they drive it through the dealership's window, he's on the other side and gets hit. As he lies unconscious, he is observed by Christine and Condition Red, and as Christine teleports out, Condition Red almost doesn't notice Last Angel's recovery and escape. He gets back to his apartment and falls asleep on the floor. When he wakes, he checks his answering machine to find messages about owed money and a jilted lover.

Back in Salem, Professor Q realizes that the poltergeist infestation was not accidental, and was an attack by the Cancer-Planet Chimera. As the Chimeran Ship moves to return home, Jackson and Union attack it, disabling the defenders and capturing the captain. Jackson has a message he wants to deliver...

Following the battle, Jackson and Christine share a shower at The Crown, while Agent Morro goes to a Washington State Asylum to visit Malcolm King...

Retrieved from "https://heykidscomics.fandom.com/wiki/The_Monarchy_Vol_1_6?oldid=1455389"
Community content is available under CC-BY-SA unless otherwise noted.