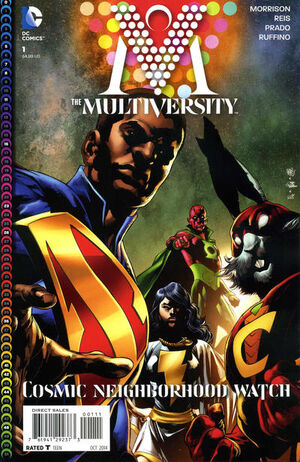 Publisher
DC Comics
Previous Issue
Next Issue
—
The Multiversity: The Society of Super-Heroes: Conquerors of the Counter-World #1

I called, you came. The whole territory, creation itself, is under attack from monsters-- things that hate us and want to hurt is all, real bad. Demons from out back of nowhere.

Appearing in "House of Heroes"Edit

Synopsis for "House of Heroes"Edit

Nix Uotan is a comic fan who is troubled by the concept of a haunted comic that purports to be part of the Multiversity event from DC Comics. As he begins cutting the pages from the book with a scalpel, he sees just how weird the book is, as it keeps breaking the Fourth Wall, and calls on his chimpanzee Mr. Stubbs to join him in a Multiversal investigation as their alter egos of Superjudge and Stubbs. As it happens, Nix is the last of the Monitors - a race of godlike super-beings with powers and abilities beyond imagination. Knowing that the comic poses a threat, Nix insists that they must find a way to keep it out of unsuspecting hands. Their first stop in doing so will be to travel to Earth 7 in their ship, the Ultima Thule.

Earth 7 is a chaotic ruin, tearing itself apart. Seeing it, Stubbs insists that whoever undid the laws of physics in this way is too great a threat for just the two of them to handle. Nix, however, believes they have no choice. They were called by that comic book. They come upon a survivor called Thunderer, who warns them to run for their lives - making it clear that it wasn't he who called them. It was, instead, a race of beings called the Gentry, and it was a trap. They called Superjudge only to break him and watch him fold. Thunderer warns Nix and Stubbs that whoever they are, they must go, and warn the Rainbow of Worlds that the Multiverse is coming to an end. The Gentry gloat that they have already broken him, and he will die unless Nix takes his place. Because this is his birthright, Nix sends Thunderer to the Ultima Thule, which will take him to the House of Heroes - the Multiversity - where he will be able to summon the greatest heroes of fifty worlds. When he has done so, he can return for Nix.

When Thunderer has gone, Nix is left to face the doom of the Gentry with a reluctant Stubbs. He hopes beyond hope that he will make it out, even as the Gentry mock that hope. As Earth 7 begins collapsing further around them, Nix wakes suddenly in his room, and drops the haunted comic book.

On Earth 23, Superman destroys a massive robot just in time to make it to a meeting on Air Force One as the President of the United States. When the meeting is through, he joins the rest of the Justice League on their Satellite to discuss the origins of the robot he destroyed. Steel explains that its technology is not of this world - or perhaps not from this universe. The robot - which continues to function in a limited capacity - is drawn to the Transmatter Symphonic Array built by Lex Luthor. The device suddenly begins emitting a cosmic SOS signal, and Superman warns the others away. However, he is not himself immune to the cube's powers, and appears to be vaporized before their eyes.

He emerges instead on a satellite where he is welcomed with excitement by Captain Carrot, who is happy to see a real Superman join him, and not just an analogue. He explains that many heroes have been dragged here since Thunderer sounded the alarm, each arriving by way of a Transmatter cube, planted on their world by a villain whose inspiration for creating it came from outside of themselves in some way. Each of the satellite's inhabitants come from an alternate universe, and have been gathered here, in what's called the House of Heroes. From here, they can see into Bleedspace and the Orrery of Worlds.

Carrot introduces Superman to some of the others, but nobody really knows what they're supposed to do now that they've all been gathered together - not even Thunderer. Determined to get some answers, Superman tries to interface with the House of Heroes' systems via Brainiac. This activates the Harbinger systems. An image of a golden woman appears before them, explaining that the fact that they were summoned means that the Monitor is dead. However, she soon realizes that she has been asleep for some time - that all of the Monitors are dead, and the menace has grown in her absence. With that knowledge, she welcomes them grimly to Monitor Watchstation ∞; the House of Heroes; the Multiversity. The hour has come to summon the greatest heroes of fifty-two worlds to protect the Multiverse.

As they come to terms with what is happening to them, the assembled heroes begin to realize that their lives have all been documented within the comic books of each others' worlds. Each comic book is like a message in a bottle from a neighbouring universe. Thunderer reveals the Ultima Thule, explaining how Nix Uotan had let him take it, saving his life in the process. While some heroes must stay in the House of Heroes to protect the multiversal universes, Thunderer takes a few aside to use the Ultima Thule to seek out Nix Uotan. Using his musical knowledge, Superman pilots the ship by improvising jazz.

On Earth 8, Lord Havok has finally collected the weapons of his enemies, the Future Family for himself. Thunderer and company, meanwhile, have arrived on that world as well, where they are immediately attacked by the Retaliators, who suspect them of being complicit in the disappearance of one of their members. Thunderer realizes, unhappily, that this is not Earth 7, as he'd hoped. The Retaliators look like his friends, but they aren't his friends. The Thule couldn't get them any closer than this. Superman tries to explain that they have come because this universe is in danger.

Meanwhile, Lord Havok is taking his revenge against the Future Family as he watches the Genesis Egg begin to hatch. Superman and company arrive on the scene just too late to stop the power within the egg from consuming Lord Havok, and to prevent the visions he sees within it from destroying his mind. Mercifully, Bowman looses an arrow through his skull, in the hopes of killing him. He collapses, but the contents of the Genesis Egg are still about to be born. Thunderer believes that the egg contains Nix Uotan, and insists on staying despite the imminent danger of the power within the egg being released.

When the egg cracks open, though, Nix and Stubbs are not as they once were, and the threat to the Multiverse is even greater than it once was - and it's all happening because you read this comic book.

Retrieved from "https://heykidscomics.fandom.com/wiki/The_Multiversity_Vol_1_1?oldid=1455412"
Community content is available under CC-BY-SA unless otherwise noted.