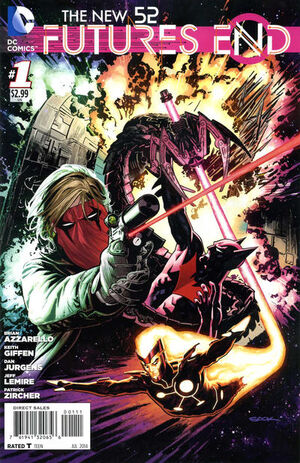 Jack Hawksmoor... Leader of Stormwatch. Your team has secretly protected Earth from alien threats since the Dark Ages--But you always knew that was all just preparation for the true storm...The ultimate threat...I am the storm you were were created for. I am here.

In order to prevent a disastrous future wherein Brother Eye kills every life-form on Earth, that era's Batman was sent back to take actions to ensure that that course of events never begins - unfortunately, he arrived seven years too late.

It was seven years ago that Mister Terrific created Brother Eye, and Terry is essentially stuck in this time, with no way to go back far enough to stop that invention. What's worse is that one of Brother Eye's assimilated cyborgs made the jump back with him. Fortunately, he manages to tear out its circuitry before it can do him any damage.

Meanwhile, Stormwatch find themselves in the Huron System, at the farthest reaches of known space without explanation. They had been pulled out of The Bleed by something, but nothing is supposed to be able to touch their ship while travelling between universes. The Engineer tries to communicate with the ship via her nanite blood, but the ship overloads her, and she collapses. Soon, she rises, speaking in an alien voice and warning that Angela Spica is gone. For years, Stormwatch had existed to prepare for the greatest storm that waited on the horizon. The voice speaking through her now is that storm. She collapses again, and apparently returns to normal, but the ship - the Carrier - begins to turn against them, then. Suspecting that whatever is causing this is outside the ship somewhere, Apollo investigates. Within moments of his leaving the ship, he is vaporized. Realizing that they are in serious trouble, Jack Hawksmoor tries to shut down the ship's systems before it can self-destruct, but they are too late. The Carrier and its inhabitants are destroyed utterly - and their destroyer heads next for Earth.

In Conover Cove, North Carolina, Grifter has tracked a group of Daemonites to the home they had taken under the guise of a normal human family. Much as they behave like real people, trying to make him doubt his actions, he has been cursed with the ability to see through the Daemonites' illusions, and he is never wrong. When the last of them, the youngest daughter, speaks his name before he shoots her dead, he feels some self-satisfaction in the knowledge that he's getting to them.

In the New York City neighbourhood of Morningside Heights, Manhattan, Jason Rusch is desperately searching for his friend Ronnie Raymond. Bursting into the shop where Ronnie's girlfriend works, he learns that she and Ronnie are up in the storage room and barges in on the pair of them getting intimate. Annoyed, Ronnie reminds that he doesn't care if he's late to answer Green Arrow's distress call, as his girlfriend grumpily marches downstairs. Annoyed himself, Jason grabs Ronnie by the arm and drags him into the Firestorm Matrix.

Resistant but obligated, Ronnie flies with Jason to Seattle. To their horror, they find that Green Arrow's lab has been completely destroyed in a devastating fire. Ronnie takes care of the civilians and puts out the fire while Jason chastises him for allowing this to happen. It had only been 25 minutes ago that the first explosion hit - a full twenty minutes after Oliver had called them. As they sift through the wreckage, they discover that Green Arrow is dead - and it's all Ronnie's fault.

Retrieved from "https://heykidscomics.fandom.com/wiki/The_New_52:_Futures_End_Vol_1_1?oldid=1444136"
Community content is available under CC-BY-SA unless otherwise noted.