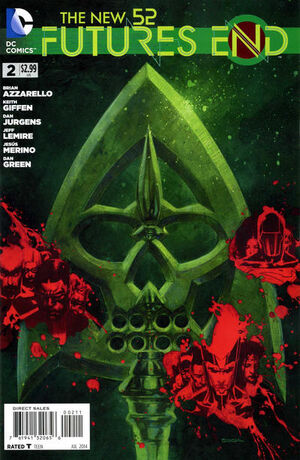 Oliver Queen may have started off as a spoiled, arrogant brat. But he died a man...with more heart, compassion, and more dignity than any of us...There's no trick arrow that can do that.

After failing to reach Seattle in time to save Green Arrow from an explosion at his lab, Ronnie Raymond is subject to criticism from his partner Jason Rusch. Jason insists that Ronnie should take responsibility for the fact that he didn't answer Oliver's call in time because he chose to ignore it for the sake of a conquest, but first, they must attend Ollie's funeral.

Mister Terrific, meanwhile, wishes it was he who was trending as he steps out of his limo to attend the funeral. Immediately mobbed by the media, he explains that it was Oliver's example that inspired him to come out as a super-hero, but reminds that the day isn't about him. Once past the media cordon, he meets with Aquaman, who derides him for being so open with the public. Michael responds that it is his choice to do that which keeps the trust between the people and the hero community from eroding. He claims that Arthur is just annoyed that he turned down a role in the Justice League. Angrily, Arthur reminds that the League has been nothing but supportive. Ignoring him, Michael points out that if he were a villain, all of these heroes gathered in one place would be like shooting fish in a barrel.

Meanwhile, Batman is in New York City, staking out the Terrifitech building. A.L.F.R.E.D. explains that Brother Eye has already been built in orbit - but its signal has been disabled since the war. So, Terry's mission must then be to prevent the satellite from going back online.

At the funeral, Animal Man offers a eulogy, explaining how he came to think of Oliver Queen as a better man than his first impression had led him to believe. He and Oliver had gone from begrudging team-mates to best friends. No matter how far they travelled, Oliver's heart had been in with the people of Seattle. And when Apokolips chased survivors from another earth to this one, Oliver had led the movement in uniting them. He'd had no powers, but he'd been the first one to take action in so many cases.

In Charlotte, North Carolina, King Faraday poses as an FBI agent, and uses that access to corrupt evidence at the police headquarters. Once done, he begins searching for Grifter.

At the funeral, Arsenal takes issue with the fact that Firestorm was allowed to act as a pallbearer after he failed Oliver and got him killed. Jason begs Ronnie to maintain his cool. Ronnie tries to claim he was busy with another emergency, but the Flash explains that they already know he didn't merge with Jason until long after the call went out. This revelation only serves to enrage Ronnie that he was being spied on. Worriedly, Jason tries to keep Ronnie's anger in check, as there are cameras everywhere. Ronnie can't contain himself, though, and he refuses to let Jason out to set things right. When he realizes that the other heroes in attendance will overpower him, Ronnie flies off in anger, taking Jason with him - forever. The viewers at home begin to feel even more disenfranchised with super-heores as a result.

That night, Lois Lane attempts to write up a blog about Oliver's funeral and his life, but she can't think of anything to say. There is no story in it for her, but there is a puzzle that needs solving, she thinks. Something about it all doesn't feel right. She is interrupted in her writing, by a knock at her door. Opening it, she finds a package at her feet. In it, she finds a series of unusual items and a note with coordinates, warning her to go alone and trust nobody. The story has begun to reveal itself.

Retrieved from "https://heykidscomics.fandom.com/wiki/The_New_52:_Futures_End_Vol_1_2?oldid=1666609"
Community content is available under CC-BY-SA unless otherwise noted.