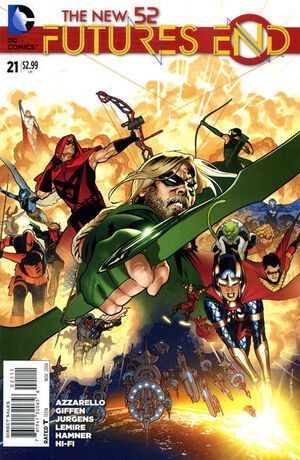 After the villain uprising, and then this invasion, our world was suddenly filled with paranoia. And, as when any two societies meet for the first time, there was mistrust, ignorance and fear.

On his island, Oliver Queen welcomes Big Barda to his army. She is surprised, naturally, because both Oliver and Red Arrow had been thought dead. The latter responds that he can barely begin to explain what happened, but when Apokolips invaded Earth 2, the residents were soon overpowered. Green Lantern and the others held back the Parademons long enough for the other heroes to escape through the Bleed to this world. While most of their companions had been on the main gunship, he and Barda were on a cargo ship with all the refugees. He had seen her trying to disguise herself as one of the others, but he did nothing to question her.

Despite successfully crossing the border between worlds, they were followed by an Apokoliptian war fleet. While Mister Miracle and the others on the gunship tried to hold them off, Red Arrow was ordered to ensure the refugees made it to Earth safely. When it became clear that they wouldn't be able to hold off the fleet with their guns alone, Scott decided to detonate the ship's self destruct mechanism, and the explosion slowed the attackers down long enough for the cargo ship to land - along with some of the Apokolips fleet. This new Earth's heroes came to face that menace, but by then, the conflict with Apokolips had become a war.

Barda knows all this, though. What she wants to know, is how Emiko could promise that Scott is still alive, even though she saw him die. Oliver interrupts to explain what happened after the war. After the Crime Syndicate's attack, and then the invasion by Apokolips, the citizens of this world became paranoid, breeding mistrust and fear between the two peoples of the two universes. Instead of letting the refugees integrate with society, Earth Cards forced ensured that they would be observed and controlled. Many people blamed the Earth 2 refugees for having brought Apokolips with them. Oliver had tried to ensure that Seattle, at least, would be an Earth Card free zone, using his resources to feed and house as many as possible. Even with his resources and profile, though, he couldn't put a stop to the corruption that held the refugees back.

He needed proof, which he gained when he encountered his doppelganger; the Red Arrow. He told Oliver about Barda and the other heroes who had either gone missing or died, apparently kidnapped by Deathstroke. Oliver knew that if the G.P.A. had hired Deathstroke to collect Earth 2 heroes, there must be more to it. Using his technology, he accessed records of the planet's defence satellites, and pored over every detail for clues. They found two significant ones. The first was that Maxwell Payne had compromised codes to those defences just days before the Apokoliptian invasion. The second was that during the battle in space, Brother Eye had discharged a pulse of energy just before Mister Miracle and the gunship self destructed. Though the self destruct sequence was initiated, the occupants of the ship were not killed in the blast.

Brother Eye transported them into its satellite at the last moment. Their reaction was one of fear, which led them to damage the satellite. Brother Eye's archives, therefore, go black soon after they arrived. The last thing on record, though, is that a Cadmus shuttle was preparing to dock with the satellite, manned solely by Deathstroke himself. It hadn't been the Global Peace Agency hunting the Earth 2 heroes at all - it was Cadmus - and they have Mister Miracle and the others.

In his attempts to locate the place Cadmus had hidden them, Oliver realized that his public profile was a hindrance. Deathstroke was targetting him constantly, and Cadmus was aware of his actions. So, he faked his own death, and returned to his island, to dig in secret and prepare for the war on Cadmus. Using drones, he found Cadmus Island, and discovered that they were performing horrific experiments on the super-humans.

Besides building his army with the Outsiders, Oliver has set other plans in motion to expose Cadmus' crimes to the public. In the meantime, though, his army is going to storm Cadmus Island and take back the people they kidnapped. Barda agrees to take part, insisting that she will not only free her people, she will wipe Cadmus from the entire planet.

Retrieved from "https://heykidscomics.fandom.com/wiki/The_New_52:_Futures_End_Vol_1_21?oldid=1444156"
Community content is available under CC-BY-SA unless otherwise noted.