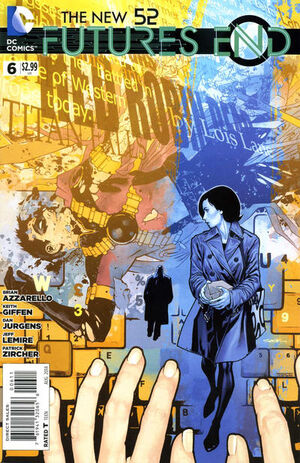 You're denying that you were once known as Red Robin? Teen Titan and partner to Batman?

In Central Park, Key and Plastique propose their plan to Coil for breaking into Terrifitech to steal the newly announced uSphere technology. Though he doesn't believe they're intelligent enough to pull it off, he acknowledges that the problem will be getting out, not breaking in. Nearby, Terry McGinnis listens in with the help of A.L.F.R.E.D. and realizes that their goals are aligned. He also notices that Plastique's DNA is a match for the cyborg he accidentally brought with him from the future - which could be good news, bad news, or a coincidence.

Mister Terrific, meanwhile, discovers that the homeless man who has been hanging around his building for days is a physical match for the new Batman who broke into his building recently. He decides that he'll deal with the situation himself.

In the Ant Farm, Frankenstein and the other Agents of S.H.A.D.E reluctantly don the containment suits they will require to safely travel with Ray Palmer to investigate the destruction of Stormwatch's Carrier by travelling through the Phantom Zone. Some years back, Ray had managed to contain the Zone and everything in it into a pocket universe with the help of Mister Terrific and Oliver Queen. By using his technology, Ray can open a microscopic portal into the Zone without allowing any of its inhabitants to escape. Through the Phantom Zone, they can travel to the Huron System much faster and much more safely than by direct channels.

As they make their journey, a sudden crack of lightning strikes their ship, and affects its reduction matrix to the extent that they return to normal size - revealing their presence to the Phantom Zoners. Though Ray is nervous, he allows Amethyst and Frankenstein to leave the ship and fight off the prisoners. To their surprise, though, the Phantom Zone is now home to prisoners other than those from Krypton. Black Adam is among them.

At the Wounded Duck bar, Cal Corcoran declares closing time and attempts to kick out a particularly stubborn drunk, who begins hitting Madison Payne. That patron happens to be Ronnie Raymond, and Cal feels he has to step in. Ronnie angrily warns that he is very powerful, but he falls flat on his back after just one hit from Cal, who then kicks him out into the street. Across the bar, they hear the voice of Lois Lane, who begs Cal to ask some questions. He declines, suggesting another time. Hoping to get a rise out of him, she shows him an old news headline where she reported the death of Red Robin. Professing ignorance, Cal grabs her by the arm and leads her to the door, warning her never to come back.

Once she's gone, Madison can't help but wonder if Lois's claims that Cal Corcoran was once Red Robin, a member of the Teen Titans. He admits only that Lois is chasing ghosts and bogus headlines, and suggests that Madison ignore her.

Outside the bar, King Faraday watches Lois leave and prepares to approach her, only to be grabbed by Superman, who warns that the reporter is off limits. Reluctantly Faraday relents, determining that he will have to devise a way to make her come to him.

Retrieved from "https://heykidscomics.fandom.com/wiki/The_New_52:_Futures_End_Vol_1_6?oldid=1444141"
Community content is available under CC-BY-SA unless otherwise noted.