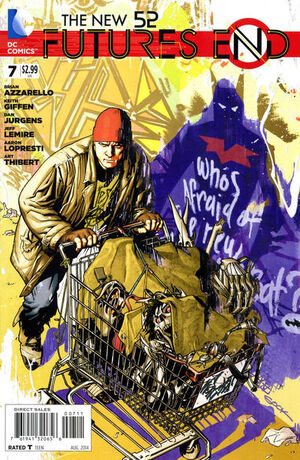 You're like all the other reporters! You're jackals, feeding on the carcasses of whatever story puts money in your pockets. Leave us alone and leave the past where it belongs!

In the Phantom Zone, the Agents of S.H.A.D.E. have encountered Black Adam, who demands revenge for having been imprisoned there by Superman. Frankenstein suggests that Ray Palmer begin piloting his ship toward their exit point while he holds the super-human phantom off, but Amethyst insists that she will do it. However, she underestimates Black Adam, and he swats her aside. Frank insists that she go with Ray, and she and the doctor hurry away. As Frank tries to catch up, Adam tears the arm from his body, impeding his progress, but fortunately, he makes it through the portal just before it closes. While Frankenstein has survived the journey to the Huron System, it is clear, though, that Stormwatch did not.

Meanwhile, in Metropolis, Lois Lane heads up the offices of her news website The Fast Lane. Running the site has the unfortunate side-effect of distracting her from her other project: the mystery box she received days ago. While she had followed one of its leads to the discovery that Red Robin is still alive (albeit unwilling to admit as much), but more of its mysteries remain unsolved.

She is interrupted from musing over the box's contents by Madison Payne, who had been at the Wounded Duck on the night Lois had tried to confront Red Robin, who is now going by the name Cal Corcoran. Madison admits that she wants to ask about Cal. She wants to know why Lois thinks that Cal was Red Robin. He had told her there was nothing to the story, and that the story everyone knows of the Titans dying is true, and it would be better left alone. Lois suggests that perhaps Cal lied to Madison, and the girl begins to realize that maybe it was a bad idea to come. Before she can leave, Lois comments that she remembers Madison from the trial of her father. Lois had testified against him in his trial for arms-dealing with the enemy during war times - but she hadn't meant to cause his family any pain. Overcome by emotion, Madison storms out of the office in fury, leaving Lois to consider that Madison and "Cal" have more in common than she thought.

Meanwhile, at Colombia University, Jason Rusch admits that his mentor, Doctor Yamakaze's invention of transporters will be important for humanity - but they are far from complete in their development. Dr. Yamakaze, though, is sure that they will be able to begin initial testing as early as the next week. He is, however, obsessed with the idea of reaching equality with the super-heroes who have kept such advanced technology as teleporters to themselves thus far. In the meantime, though, they need help moving some heavy equipment, and Yamakaze suggests enlisting Ronnie Raymond to help - but Jason is not on good terms with him.

Ronnie, meanwhile, is in Pittsburgh at the memorial for a battle that occurred there during the war. His mother was among those lost.

On Cadmus Island, Deathstroke complains of the fact that Cole Cash has been paralyzed from the neck down - which he assumes would be a problem if they're to team up. Fifty Sue explains that this will not be an issue.

Cole, meanwhile, has had his paralysis reversed, in exchange for his obedience, if reluctantly. He soon learns that King Faraday intends for him to combine his ability to see aliens with the abilities of Deathstroke on a team. Slade will call for him when he's needed, but in the meantime, Fifty Sue will show him around.

Meanwhile, in Madison Square Park, Coil, Plastique and Key continue their plans to break into Terrifitech and steal the uSpheres, while Terry McGinnis eavesdrops from nearby, disguised as a homeless person. As 50 dollar bill drops next to him, and when he fails to pick it up, it confirms to Michael Holt that this man is not a vagrant. Donning his bat suit, Terry attacks Mister Terrific, though A.L.F.R.E.D. warns that efforts to kill him at this point are moot. With Terrifitech security surrounding him, Terry's best course of action would be to abandon the remains of the cyborg that came to the past with him and escape - though it is dangerous to let Holt get his hands on the cyborg. As Terry hurries away, both Plastique and Holt are disturbed and intrigued by the remains he left behind.

Retrieved from "https://heykidscomics.fandom.com/wiki/The_New_52:_Futures_End_Vol_1_7?oldid=1444142"
Community content is available under CC-BY-SA unless otherwise noted.