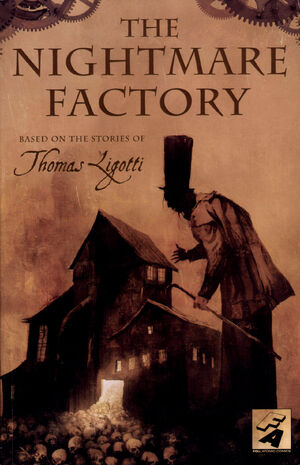 Appearing in "The Last Feast of Harlequin"Edit

Synopsis for "The Last Feast of Harlequin"Edit

A man with Seasonal Affective Disorder travels to a small town called Mirocaw to partake in the winter festival of clowns. Once there, he encounters his old professor who has become a cult leader among those who assume the aspect of clowns during the festival. The man learns that the cult has a sinister secret as the clowns load up in the back of a truck and head out into the woods in the middle of the night. They enter a cavern and descend underground where the cult leader leads the clowns in chants which transform them into worm-like creatures. The worms devour the daughter of a woman they devoured in the town's festival twenty years previous. The man turns to run back to the surface, away from the cult, but after he has left Mirocaw he is haunted by his professor's words when he stopped the cultists that had not transformed from pursuing him "He has always been one of us."

Appearing in "Dream of A Mannikin"Edit

Synopsis for "Dream of A Mannikin"Edit

A therapist sees a patient who works in a department store dressing the mannikins. She complains of a dream where the mannikins come to life. He gives her a prescription for Valium and tells her she should seek companionship but she doesn't show for her next appointment. When he calls the number that she gave him he is told he has a wrong number. He drives to the department store where he is shocked to see a mannikin in the window who resembles his patient. He begins to be plagued by recurring nightmares where the mannikins move and a voice commands him to "Die into Them".

After an asylum is demolished the spirits that had been sequestered there take up residence in the neighboring town. When a fire starts in the grandson of the doctor who built the asylum's house, the people do not attempt to stop its spread. It burns the entire town to the ground.

A writer is intrigued by a secret society known as Teatro Grottesco. No one knows why it is called that and no one knows how to contact it. He knows only that it seems to act as an anti-artistic force among those creative types that cross the society's path. He decides to provoke a meeting by writing some anti-Teatro Grottesco short stories and he spreads the word among his artistic friends that he will divulge these non-existent writings in two days. Immediately after he collapses from a stomach ailment and awakens to find himself in a hospital bed. He moves down the corridor and encounters a doctor whom is a representative of Teatro Grottesco. The doctor invites him to join the society and tells him that he will receive a follow-up contact. When he gets the follow-up he is told if he joins Teatro Grottesco they can cure his stomach ailment. If he does not, his life will become a living hell. The writer wonders if it matters what he chooses. He seems to have become somewhat unhinged.

Retrieved from "https://heykidscomics.fandom.com/wiki/The_Nightmare_Factory_Vol_1_1?oldid=164286"
Community content is available under CC-BY-SA unless otherwise noted.