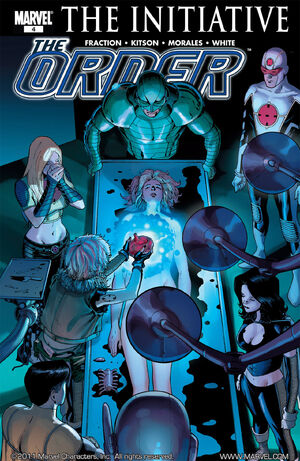 Appearing in "4: Magdalena - or - Nine Doves"Edit

Synopsis for "4: Magdalena - or - Nine Doves"Edit

The episode begins with Magdalena's interview. Her childhood dreams were about tae kwon do and orphans, and so she became a martial arts star, then an actress, to fund her dreams of giving orphans homes. The interviewer asks if she ever thought of having children of her own?

Veda direct her 'babies' to attack the Zobos. The Order team seem to be facing exactly twice as many as last, and spread more out over the city.

In the Bradbury's morgue, an insecure Mulholland is holding Avona's heart, hoping to learn of her fate. Avona's 'ghost' appears to her.

In the hectic battle, Anthem starts regretting his decision to give Calamity a day off, but they are unable to contact him. S.H.I.E.L.D. arrive with backup. Together they contain the threat. The city committee emerge from the shelter, they certainly do not see the Bradbury building as being safe like this, and demand the Order find a new place.

Heavy, Anthem, Hera and Kate Kildare have a senior staff meeting. Heavy believes the enemy is sending the Zobos to test their strength and look for weaknesses. Hera states that since they are prestigious and Stark-funded, anybody could be out to get them. Becky has a sex tape. They're getting evicted. Holly knocks on the door to inform her that she's talked to Avona's ghost. Anthem replies that he wants to quit.

The Man From S.H.A.D.O.W. meets Jamal Peoples at a bar and hires him.

Henry calls Tony to chat a little about their troubles. He finds out Tony has been skipping on AA meetings.

In the S.H.I.E.L.D. lab, the heroes discover the zobos are, indeed, deceased hobos reanimated with cybernetics and controlled via the mobile net.

Anthem arrives at the trailer park when Carl Crenshaw lives, fearing the worst. However, in Carl's home, James and Carl have been peacefully talking about their lives and playing wii.

Anthem and Veda find the mission where they reason the Zobos were made, but they find it abandoned of life - and zombies - but full of operating tables. They mean to call S.H.I.E.L.D., but then Anthem spots the Man From S.H.A.D.O.W.'s sunglasses on a control table - it just got personal. Veda decides to buy the building and turn it back into a mission.

Magdalena ends her interview with telling she she was sick as a child and can't have children herself. Her orphanages and schools house 384 children across the world, and to her that is saving the world 384 times every day.

Retrieved from "https://heykidscomics.fandom.com/wiki/The_Order_Vol_2_4?oldid=1449271"
Community content is available under CC-BY-SA unless otherwise noted.