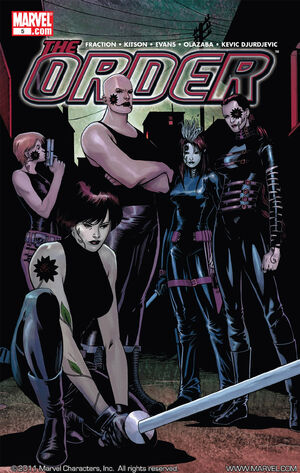 So, to review, we're telling Henry that either the car just disassembled itself -- or a city of Hopi lizard people did it.

Appearing in "5: Kate - or - Getting Things Done"Edit

Synopsis for "5: Kate - or - Getting Things Done"Edit

The episode begins with a job interview of the team PR manager, Kate Kildare, who saved Henry Hellrung's life and career when he was busy drinking it away.

Kate shows Becky Ryan the incriminating footage, recorded in secret by a dirtbag of an ex-boyfriend, and suggests she is benched until Kate takes care of it.

Somewhere around Barstow a driver is attacked when a turtle on the road transforms into a huge monster. The Order later arrives at the car scraps, unsure what to make of the victim's monster story - though Mulholland does find a large chunk of turtle shell.

Tony and Henry are on the hunt for a new Order headquarters location, since the Bradbury building was declared a historical landmark and the city kicked them out. The Demeter is an old luxury mansion up in the hills; Henry has many questions but Tony simply signs a blank check out to the retail agent.

Veda and Calamity are in Boyle Heights, ready to move in on the former Corona's apartment. Calamity tells her how he went to Carl Krenshaw with every intention of punishing him, but stopped when he saw the man's life already wrecked from guilt, worse than anything James could do to him. Calamity enters Carlos'/Corona's apartment, running into the Black Dahlias who have Carlos beaten and bound. They toss Calamity out of the building and attack Veda.

Kate informs Hera, who is busy directing the mission, that if she can make it appear that Becky was a minor at the time of the footage, Kate might have an angle that can solve it - but it does involve "fudging" laws. Hera receives Veda's call for backup.

The badguys take down Calamity and are ready to shoot him, but Supernaut and Mulholland arrive. One of them, brandishing an intelligent sword, recognizes Holly, freezing her in her tracks. The Black Dahlias teleport away.

Becky is crushed when her new faked age becomes a TV scandal, losing her her pageant titles and making her father look like a criminal - all sacrficed to protect her new superhero career. Pepper comments that it's going to be a long year.

The team is disappointed that Holly has failed them in combat again, but she reveals her own Black Dahlia tattoo - she used to be one of them!