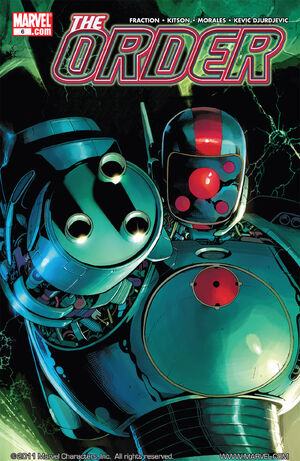 I want you to know -- when your life has completely fallen apart; when you're all alone, and lost, and hungry, and wondering just how the hell you managed to fall so far so fast -- this is precisely the moment when I stopped caring about you.

The episode opens with Milo's interview; he is surprised that Tony, Iron Man, isn't into metal music. He relates of his service in a Somali civil war, how he was captured and his platoon killed, and he finally rescued by chance - not as dramatically or gloriously as in the movie. He later joined the anti-war movement, threw his medals at the president's car, and was shot in the spine by security.

Supernaut and Aralune take on two giant lizard-men and a scorpion in the desert. They discover they are on a S.H.A.D.O.W. test range, then a security system knocks Becky down and fries Milo's suit. He opens the hatch and tries to take the giant scorpion down with two handguns.

Pepper tries to wrestle information about the Black Dahlias from Mulholland, but when she was younger they protected her and she wont rat them out. Back then they protected the streets and killed no one. An extremely disappointed Henry kicks her out. He calls Tony, intending to inform him of the development, but instead Tony blabbers on about the Demeter mansion and all the new publicity ideas he has for the Order. Henry shouts for him to get his priorities together, he has a super hero team to run here. Tony has fifty. Henry and Pepper share their experience with Tony Stark's arrogance, but also worry about the M.A.N. from S.H.A.D.O.W. - who is he and why has no one heard of him before?

Milo is on the ground, fighting the scorpion with a rock. It has his leg in a pincer, but being paraplegic, he can't feel it. He pacifies the scorpion for a time and drags Becky to safety. They hide in a nearby cave, when the M.A.N. arrives, telling his S.H.A.D.O.W. team to search them out and kill them.

The M.A.N. meets with Wendy of the Black Dahlias. They bring him dead Corona, he brings superpower drugs for them and their ringer.

Holly goes to a liquor store, but soon the Black Dahlias incapacitate her with super-power inhibiting nanobots.

Heavy is examining one of seven mysterious devices that have appeared on the San Francisco coastline. The Mayor encourages him to move the Order to them, rather than L.A. The devices activate, raising a wall of water around San Francisco. Soon, Namor steps out of the water, saying he has raised the walls to protect his people from the U.S. government. He asks to be taken to their leader.

Milo and Becky cower in the cave. Strange wolf-men lurk outside.

Retrieved from "https://heykidscomics.fandom.com/wiki/The_Order_Vol_2_6?oldid=1449273"
Community content is available under CC-BY-SA unless otherwise noted.