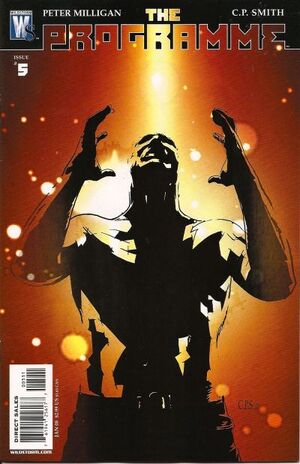 The jets that were sent into 1953 by Pravda return to the present at Moscow's Red Square after being missing for four days. The President's aides state that the disappearance of the jets is enough to convince them of what they are dealing with and strongly lay out a retaliatory strike against the dolls through three small tactical nuclear warheads. The President instead wants to see the sole pilot who came back.

Senator Joe introduces himself to Max, stating that things had been explained to him and that he was made to believe to think he is Senator Joseph McCarthy. Which he reveals to be an African-American. Joe wants Max to join him in stopping the Russian dolls, but Max refuses and attacks him. Mike, Hinks, and Stella Blake are at Max's bar and witness the fight from outside. Max sees and recognizes Hinks before being blasted by Joe. As Max is wounded and confused due to what Hinks had programmed into him, he emits a strong yield of energy and beats Joe. Shocked by everything that is happening to him, Max leaves by flying away in distress.

After learning from Blake, the President's only hope that having the other deactivated Russian dolls to stop their counterparts.

Somewhere, Vladimir Korovin and Roman Kelski finds one of the dolls, Revolution, a firestarter, in a facility. They are then joined by Stalingrad, a big and muscular man. However, Korovoin betrays Kelski as Revolution prepares to burn him.

The President learns that Korovins and the two Russian dolls are regrouping with the Spirit of Lenin and Pravda in southern Talibstan to continue fulfilling their purpose by destroying American imperialism. He condescends in initiating a triple nuclear strike on the superhumans in Talibstan.

Retrieved from "https://heykidscomics.fandom.com/wiki/The_Programme_Vol_1_5?oldid=1469997"
Community content is available under CC-BY-SA unless otherwise noted.