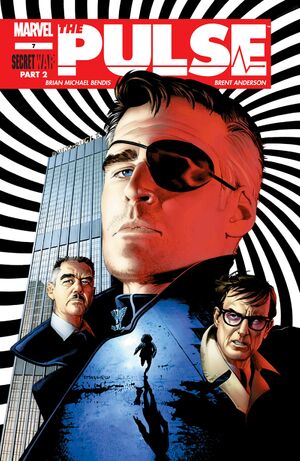 Ben Urich finds Jessica in her and Luke's destroyed apartment in Harlem the morning after the attack at Mt. Sinai Hospital, and Jessica describes the attack that ripped the room in half as well as the attack on the hospital during which the comatose Luke went missing. Urich is shocked to learn that Nick Fury and Captain America were involved in the incident, and admits that he heard nothing about either of the attacks.

Jessica and Ben head back to Mt. Sinai to find the hospital destroyed, and the police refuse to explain what happened. A nurse accuses Jessica of being involved with the destruction of the building, and insists that she doesn't know where Luke is while making racist comments about Jessica and Luke's relationship. Ben calls Gloria Grant at the Daily Bugle to leave a message for J. Jonah Jameson and Robbie Robertson, and learns that a "couple of people called in some 'fireworks' at the pier."

Jessica and Ben head to the pier to find it equally destroyed, and Jessica questions the homeless man who was rescued by Daredevil during the battle the previous night. Jessica leaves another message for Murdock, and reveals to Ben that she once turned down Fury when he offered her a job working for S.H.I.E.L.D., then attempts to call Clay Quartermain only to find his number disconnected. She attempts to call Danny Rand, Misty Knight, and Luke's cellphone, but gets only their voicemails, and checks her own answering machine to find that she has no messages.

Ben and Jessica had to the office of the Daily Bugle where Jessica explains the situation to Jameson and Robertson, only to watch Jameson walk out of the room at the mention of Nick Fury. Robertson explains that no one in the media reports on stories involvign Fury because they assume that if Fury wants something kept secret, thousands of lives or basic freedoms must be at stake, but Ben claims that no one reports on Fury because they fear losing government accesses. Jessica storms out of the building, and spots a trenchcoated man watching her from the sidewalk outside, but he vaporizes when she attempts to pursue him, having been a holographic projection.

Jessica visits Misty Knight's apartment, but faints on the steps of the building. She is later found by a couple of children who are scared away by the sudden appearance of a trenchcoated man who tells them to "go to school." Two more trenchcoated men subsequently appear, revealing that they are agents of Hydra.

The homeless man from page 10 of this issue previously appeared on page 7 of Secret War #4.

Retrieved from "https://heykidscomics.fandom.com/wiki/The_Pulse_Vol_1_7?oldid=1450569"
Community content is available under CC-BY-SA unless otherwise noted.