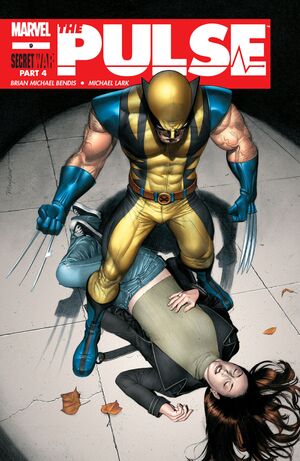 Why won't anyone help me find Luke? All I care about is Luke!

At the Daily Bugle building, Jessica yells at J. Jonah Jameson for turning his back on her and quits her job as consultant for The Pulse, storming out of the office with Ben Urich and Kat Farrell following. Outside, Ben tries to calm Jessica before spotting Al Mackenzie on the sidewalk, and Mackenzie explains to Jessica that Luke is being kept "upstate."

Jessica, Ben, and Kat travel to the address that Mackenzie gave them, finding a bar called The Locust. Jessica heads inside and finds Wolverine in a back room, and explains that she is looking for Luke Cage, and Wolverine orders her out of the bar. Jessica apologizes, and an enraged Wolverine threatens her before breaking down sobbing, lamenting that he has repeatedly been made to do things that he "don't wanna do." Wolverine claims that Mackenzie sent Jessica to anger him enough to kill Nick Fury, and tells her that Luke Cage is one of the four good people he knows. Urich suddenly realizes where Luke is being held.

Ben leads Jessica and Kat to a "night medical center" in Chinatown that he knew about because of his association with Daredevil, and they encounter Danny Rand, who admits that Luke is being treated at the center but refuses to allow Jessica to see him. Misty Knight, however, orders him to let Jessica through, and she finds Luke awake in a hospital room.

Their tearful reunion is interrupted when a holographic projection of Nick Fury appears in the room and explains that Jessica will soon know why Luke was attacked. Jessica demands that Fury "get the $%#@ out of [their] lives," and promises to do just that after telling Jessica that she and Luke are "good people."

At the office of the Bugle, Jameson considers the newspaper's front-page story: "FURY'S SECRET WAR Hits New York City." Robertson claims that running the article without knowing the whole story could start "a world war," and insists that they will never know why Fury launched his "secret war."

Retrieved from "https://heykidscomics.fandom.com/wiki/The_Pulse_Vol_1_9?oldid=1450571"
Community content is available under CC-BY-SA unless otherwise noted.