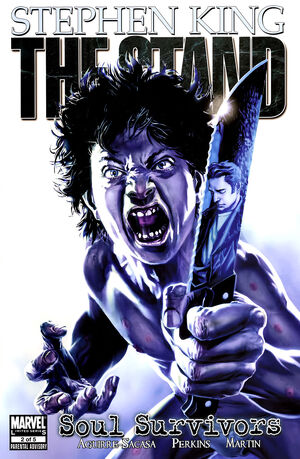 Appearing in "Part 2 of 5"Edit

Reeling from the death of his companion Rita Blakemore (not to mention his own near-death), Larry Underwood is wandering the highways of New England, on the verge of mental and physical collapse. And someone is following him. A mysterious woman with raven-dark hair named...Nadine Cross. Face facts, True-Believers, you've never met a woman like Nadine. Nor a boy like her feral, murderous sidekick "Joe." The spotlight on the "soul survivors" of Stephen King's horror epic continues this issue! Cardstock Cover/Parental Advisory …$3.99 ©2009 Stephen King. All rights reserved. Published by arrangement with The Doubleday Broadway Publishing Group, a division of Random House, Inc.This graphic novel is produced under license from The Doubleday Broadway Publishing Group and Stephen King.

Retrieved from "https://heykidscomics.fandom.com/wiki/The_Stand:_Soul_Survivors_Vol_1_2?oldid=1454331"
Community content is available under CC-BY-SA unless otherwise noted.