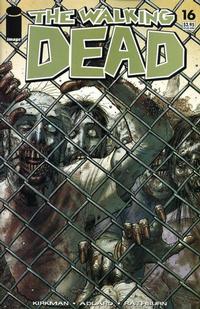 Hershel's youngest daughters have both been murdered and the survivors have instantly pegged it on Dexter, the convicted murderer. Meanwhile, Tyreese may be dead after he was left in a zombie filled gym. However, when they check in on the gym, they see him sitting there amongst a pile of dead zombies. With Dexter locked up, the survivors feel safe, but unfortunately for them, they've locked up the wrong convict. While Andrea is washing clothes, Thomas comes at her with a knife.

Retrieved from "https://heykidscomics.fandom.com/wiki/The_Walking_Dead_Vol_1_16?oldid=1405430"
Community content is available under CC-BY-SA unless otherwise noted.