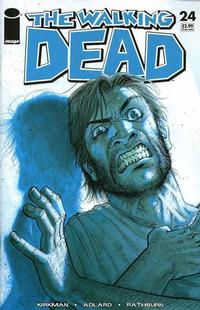 Rick finally reawakens after 26 hours of being passed out. After he finally gets up, Dale lets him know that they've all decided that the pressure is getting to him and that he can't be their leader anymore. Everybody thinks Rick is crazy, which he nearly agrees with. He walks out to the garden and delivers a speech to them all explaining his motives and famously declaring that "we are the walking dead."

Retrieved from "https://heykidscomics.fandom.com/wiki/The_Walking_Dead_Vol_1_24?oldid=1405415"
Community content is available under CC-BY-SA unless otherwise noted.