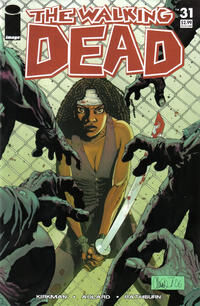 The Governor's arena bouts are basically staged, so after one fighter knocks out another man's teeth that he can't get fixed, the injured party gets revenge by stabbing his aggressor in the neck. Since they are down one fighter, the Governor offers Michonne a break from the rape. If she enters the arena with a sword and puts on a good show, but does not kill her opponent, he will make things a bit easier for her. Michonne decapitates her opponent, sending him into a rage, but he decides to cool off before he does anything with her. Martinez and Glenn spring Rick.

The Walking Dead Vol 1 31 Back.jpg
Back cover
Add a photo to this gallery

This article is a stub/incomplete. You can help Hey Kids Comics Wiki by expanding it.

Retrieved from "https://heykidscomics.fandom.com/wiki/The_Walking_Dead_Vol_1_31?oldid=1405471"
Community content is available under CC-BY-SA unless otherwise noted.