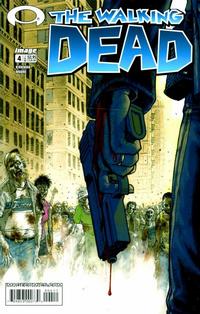 That night after the zombie attack, Shane is keeping watch. Rick visits with him and the two discuss the situation. Rick believes that the group needs to move on. He feels that it's too dangerous to be near Atlanta where so many zombies could attack the small group. Shane believes the group should stay put, believing that the government is coming to clean up the mess and if the group stays put, they will be easily found by rescuers. Rick finally concedes but says that they need to train everyone to use a gun and that everyone should be armed. Shane asks how they will get enough guns and Rick says he will think of something.

The next morning, Rick talks to Glenn and asks him if he has seen any gun stores on his trips into Atlanta to get supplies. Glenn doesn't recall, but asks Jim and he gives them the location of a store. Glenn goes to find his map, and while he's gone, Rick talks to Lori and tells her he is going to help Glenn to get some guns. Lori isn't happy about it but he reassures her that he will be fine. He also mentions that he is going to teach Carl to shoot a gun, and before Lori can fight him on the subject, Rick and Glenn head into Atlanta for supplies.

As Rick and Glenn walk toward Atlanta, Rick asks about Jim's mental state. Glenn says that Jim is the only known survivor from Atlanta, and he watched his family torn apart by zombies when he escaped. Glenn suddenly stops and says that the gun store is about 5 blocks further than he has ever gone into the city. He says there is no way the two can possibly do it. Rick says he has an idea and takes Glenn to the zombie that he killed the day before. Rick says he notices that zombies don't mistake themselves for a living person, and he believes the reason is smell. Rick chops up parts of the zombie and tells Glenn to rub it on his clothes and put a few pieces in his pockets. Rick hopes that by smelling like the zombies, the zombies won't attack them. The two proceed into the city limits.

As soon as they arrive, they walk up to a zombie to see how well the theory works. At first it appears that the zombie is going to attack Rick, but it settles down as Rick moves back. As they walk further in to the city, they notice that none of the zombies come after them.

They arrive at the gun store to see a large crowd of zombies. Rick tells Glenn to remain calm and grabs a shopping cart to carry more guns. They grab as many guns and ammunition as they can and exit. As they do, Rick mentions that it is starting to rain, and as Rick hits a zombie in the head with an ax, it begins to downpour. The two start to run as the rain begins to wash away the zombie smell. The zombies take notice of Rick and Glenn and attempt to attack them. A zombie bites Rick's shoulder and Rick starts firing at the crowd of zombies to make a path for Glenn, who is pushing the shopping cart. The two get outside of the city limits and Rick tears off his jacket, relieved to see that the zombie did not break his skin. Rick asks Glenn not to tell Lori about the close encounter.

Meanwhile, back at camp, Shane and Lori are talking. Shane tries to console Lori, saying that Rick will be fine. He tells her to come back to the camp, and that he will keep her company. Lori refuses Shane and tells him that he needs to stop trying to make advances at her since Rick is back. Shane says, "But what about that night when we - on the road down here?" Lori, her back to Shane, says, "That night was a mistake."

Retrieved from "https://heykidscomics.fandom.com/wiki/The_Walking_Dead_Vol_1_4?oldid=1405453"
Community content is available under CC-BY-SA unless otherwise noted.