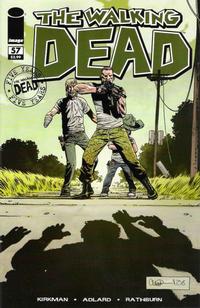 Rick, Carl, and Abraham head north to Rick's police station while the rest of the group stays put and waits for them to return. Three punks attempt to rape Carl and Rick tears one of their throats out with his teeth. Abraham shoots the other one and Rick stabs the last one to death.

Retrieved from "https://heykidscomics.fandom.com/wiki/The_Walking_Dead_Vol_1_57?oldid=1405504"
Community content is available under CC-BY-SA unless otherwise noted.