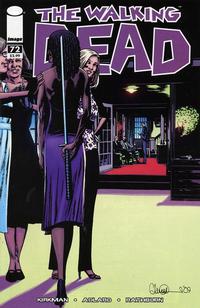 Rick gets Glenn to fake being drunk so that he can leave the housewarming party Douglas has thrown for them in order to scout out the building that Douglas has collected their guns in. Rick has decided he's going to assign Glenn the task of retrieving their guns.

Retrieved from "https://heykidscomics.fandom.com/wiki/The_Walking_Dead_Vol_1_72?oldid=1405464"
Community content is available under CC-BY-SA unless otherwise noted.