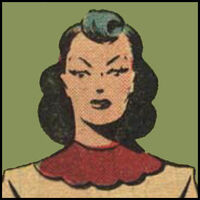 I'll do everything I can do to prove to the world you're not what they think!

-- Thelma Gordon (to the Comet)

Thelma Gordon was a newspaper reporter who met the Comet while he was on the run from the law. When he confessed to her about being hypnotized by a mobster and committing robberies, even killing an officer while on a heist, she believed in his innocence. She fell in love with him and became his girlfriend and confidant.

Though she helped him on several cases, she was ready to marry him if he stop his dangerous life. But John refused, believing his past crimes would never be atoned for, and his guilt would never leave him.

Unfortunately, their life together was short lived. Everything changed dramatically when John's brother, Bob Dickering, came for a surprise visit.

During his brother's stay, John was to be a chief witness against "Big Boy Malone." While he continued to prepare for the case, he suggested that Thelma and Bob spend time together without him.

When Big Boy Malone learned that "Dickering" was going to testify against him, he sent orders to kidnap him. A few days later, Malone's henchmen entered John's apartment and grabbed his visiting brother by mistake. Before forcing Bob into their car, the Comet came to his brother's rescue, but was gunned down in a hail of bullets and mortally wounded. With his brother dying, Bob swore to carry on the fight against crime and became -- The Hangman.

Prior to his death, John gave his blessing to Thelma and Bob, and they began dating. The two were found making the rounds of the town together quite often. As she did with John, Thelma became Bob's girlfriend and confidant, but she also became his wife. Though never a costumed hero, she fought alongside her husband using her trusty handgun.

The two had a son named Steven. Several years later, when Bob Dickering laid dying in a hospital, a cycle was repeated, when his son donned his father's costume and swore to carry on the fight against crime. He become -- The "new" Hangman.