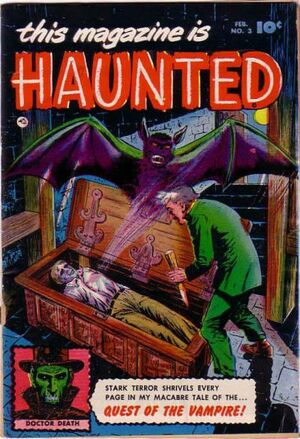 Appearing in "The Cult of the 13 Ghosts"Edit

Synopsis for "The Cult of the 13 Ghosts"Edit

A slumlord builds a shoddy apartment over the cemetery that houses the bones of 13 killers banded together as a cult of death. The ghosts appear in the basement but they don't pay rent so the slumlord confronts them. They threaten to kill him unless he joins their cult. He agrees just so he can get out of the basement and then plots to raze the apartment, thus depriving the spirits of their meeting area, and build a new modern and more expensive building. His accountant says that it will cost a tremendous amount of money but the landlord thinks he can profit by higher rents. When they level the old building the workmen uncover a corner stone which identifies the evil nature of the dead 13 spirits and the accountant gives it to his boss. After the new building is completed the landlord tours it only to discover the 13 ghosts have taken it over. They threaten to kill him for betraying them, but the miser finally has an unselfish thought and throws the cornerstone at the cult's leader to stop the ghosts from murdering others. The cornerstone connects and there is a tremendous explosion which blows the miser from the building. Unharmed, he watches a furrow develop in the Earth which swallows up his property and his fortune.

Appearing in "Beware The Jabberwock"Edit

Synopsis for "Beware The Jabberwock"Edit

Synopsis for "Quest Of The Vampire!"Edit

Retrieved from "https://heykidscomics.fandom.com/wiki/This_Magazine_is_Haunted_Vol_1_3?oldid=479886"
Community content is available under CC-BY-SA unless otherwise noted.