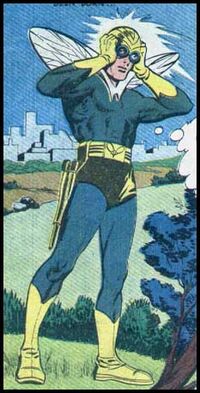 I wish I were the Fly!

When Thomas Troy was a young boy, he was sent from the Westwood Orphanage to live with Ben and Abigail March. When he entered the March's attic he discovered a "Fly Ring" and wore it on his finger. A glowing beam spotlighted the wall, and out came Turan, Emissary the Fly People. Turan explained that he was from another dimensional plane outside of Earth's galaxy, and that his people were reduced to the insignificant form of flies. He encouraged Tommy to become a hero with a "pure-heart" and help fight the war against crime by rubbing the Fly Ring and saying "I wish I were the Fly!"