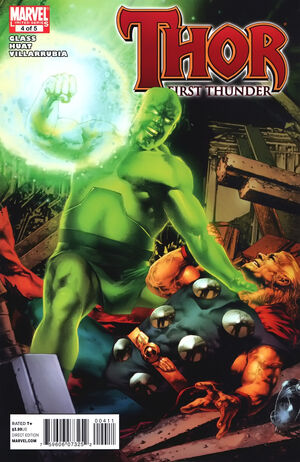 Mighty Thor versus...Tony Stark? Can anything good come from the infamous industrialist ensnaring the god of Thunder in mortal politics? And how does it lead to the creation of one of Thor's most dangerous foes, China's Radioactive Man? Will Thor's intervention spark an international incident or trigger thermonuclear war? And what truth will this 21st century villain reveal about the ancient origin of Thor's curse and his banishment to Earth? Meanwhile, the scheming Loki observes all, and learns the one detail he needs to finally conquer the Odinson!

Retrieved from "https://heykidscomics.fandom.com/wiki/Thor:_First_Thunder_Vol_1_4?oldid=1464659"
Community content is available under CC-BY-SA unless otherwise noted.