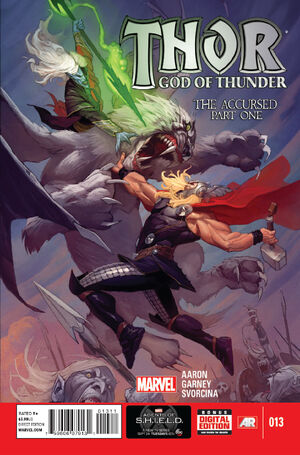 We ride, my warriors. To the gardens of Alfheim and the mountains of Nidavellir. To the frozen fields of Jotunheim and beyond. Wherever the Dark Elves cower, we ride. Let the great horn be sounded. The Wild Hunt has begun!

Appearing in "The Accursed, Part One: The Great Niffleheim Escape or The Svartalfheim Massacre"Edit

Synopsis for "The Accursed, Part One: The Great Niffleheim Escape or The Svartalfheim Massacre"Edit

On the shores of Niffelheim, a group of Dark Elves arrive and break into the Hall of Nastrond. Their goal is to free their leader Malekith. They manage to free him with only one of their group, Scumtongue, surviving and they then make their way to Svartalfheim. In Asgardia, Thor, Sif and the Warriors Three are celebrating Volstagg's nomination to Governor on the Council of Worlds, when a Dark Elf begins screaming that her world is burning. The heroes quickly fly to Svartalfheim, and there they find a massacre, with men, women and children all slaughtered. Scumtongue and Malekith reveal themselves, along with the other Dark Elves that follow him. Malekith tells Thor that he came home, but was disgusted by how weak his people had become, and plans on hunting them all down across the Nine Worlds and teaching them to be strong again. Leaving Thor and the Asgardians behind, Malekith and his group call forth the Wild Hunt.

Movie Variant Also Available • Beginning a new arc featuring the bloody return of one of Thor’s greatest enemies: Malekith the Accursed! • Once the former lord of the Dark Elves is freed from his otherworldly prison, the chase is on across the Nine Realms to capture him and end his vengeful reign of terror!

Retrieved from "https://heykidscomics.fandom.com/wiki/Thor:_God_of_Thunder_Vol_1_13?oldid=1519616"
Community content is available under CC-BY-SA unless otherwise noted.