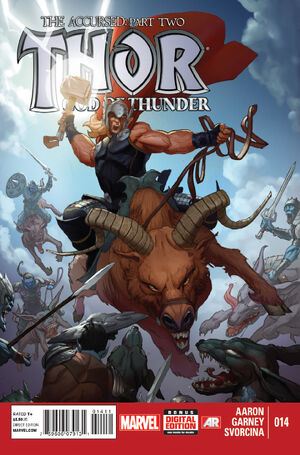 Appearing in "The Accursed, Part Two"Edit

• The Wild Hunt has begun! As Malekith the Accursed continues his bloody rampage across the Nine Realms, Thor finds new allies to aid him in the chase: A Dark Elf sorceress!

• A gun-toting Light Elf! A gargantuan Mountain Giant! A dwarf who loves dynamite! and a particularly surly troll..?!

Retrieved from "https://heykidscomics.fandom.com/wiki/Thor:_God_of_Thunder_Vol_1_14?oldid=1464680"
Community content is available under CC-BY-SA unless otherwise noted.