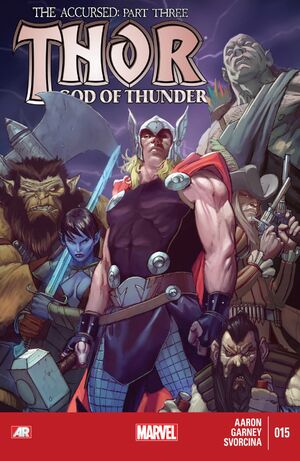 League of Realms! Let this be the day they remember us for! Let all nine worlds echo with our fury! Let Malekith know his reckoning has come!

Appearing in "The Accursed, Part Three: Bury My Heart In Jotunheim"Edit

Synopsis for "The Accursed, Part Three: Bury My Heart In Jotunheim"Edit

Thor and the League have caught up to Malekith and his Dark Elves in Alfheim, and manage to stop them, but once again Malekith slips away. Thor worries about his League falling apart in front of him, but figures out a way for them to bond together, even if for just a little while. They head to the nearest tavern, where Thor and Ogg engage in a drinking contest, while the others wager on the winner. Later, outside, Thor has other plans for winning Waziria's trust, and kisses her passionately. The next day, the League heads to Jotunheim, where once again the League has caught up to Malekith and his army. During the battle, Malekith kills Oggy. And before the League can respond, they realize where they are. They are no longer in the lands of the Mountain Giants, but are now in Frost Giant territory.

• Thor and his newfound compatriots in the League of Realms chase the Dark Elf marauder across the Nine Realms: From the exotic fairy gardens of Alfheim to the frozen mountains of Jotunheim, where giants dwell. • But when one of the League falls…will it mean war for all Realms?

Retrieved from "https://heykidscomics.fandom.com/wiki/Thor:_God_of_Thunder_Vol_1_15?oldid=1464681"
Community content is available under CC-BY-SA unless otherwise noted.