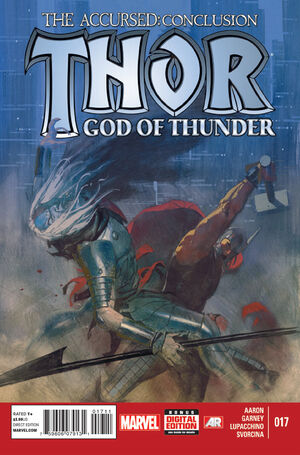 Isn't it obvious? You are. You wanted the Dark Elves to stand together, remember? And so they have. Who did you think they would elect? A peacemaker? Have you met my people before? Dark Elves aren't weak little children, locking for a mother to love and coddle us. We only follow the leaders we fear. And as of now... Svartalfheim fears no one more than me. Many thanks for your assist in this matters, God of Thunder. Would you like a seat of honor at my coronation feast?

Appearing in "The Accursed, Conclusion: The God Who Saved the Elves"Edit

Synopsis for "The Accursed, Conclusion: The God Who Saved the Elves"Edit

On Midgard, with the hidden Dark Elf Council of the Unhallowed, Malekith has arrived and it's revealed that he had placed a spell in Thor's mead to infect him with a creature, enabling Malekith to keep tabs on the League of Realms. As Malekith is about to kill Thor, the League of Realms arrives, with the completely not-dead Ud. Thor reveals that he learned a thing or two about magic from having Loki as a brother, and tricked them all into believing Ud was dead. The League of Realms has Malekith and his group of Dark Elves down, but before Thor can Kill him, the Dark Elf council has finally decided to stand together, and have made a decision. Back in Asgardia, they reveal that their decision is to anoint Malekith their king. Enraged, Thor demands to know who is responsible, and Malekith gladly tells him that Thor himself is. The Dark Elves always have followed the leaders that they feared, and now no one is more feared that he is. The Congress of Worlds concurs, but that he is welcome to take the throne of Svartalfheim, after he has finished his sentence. Demanding a proxy by royal right, Waziria volunteers to help ensure the peace. To rub salt into the wound, Malekith names Scumtongue as senator to the Congress. Later, in Muspelheim, Malkeith and a Frost Giant make their way to speak to the Fire Demons about a League of their own.

Thor’s desperate tour of the Nine Realms brings him to Midgard, to Earth, where he makes his final stand against Malekith and the dark forces of the Wild Hunt.

But what has become of Thor’s newest compatriots, the League of Realms? Who stands revealed as the traitor in their midst?

And what bloody victory has Malekith already won?

Retrieved from "https://heykidscomics.fandom.com/wiki/Thor:_God_of_Thunder_Vol_1_17?oldid=1475767"
Community content is available under CC-BY-SA unless otherwise noted.