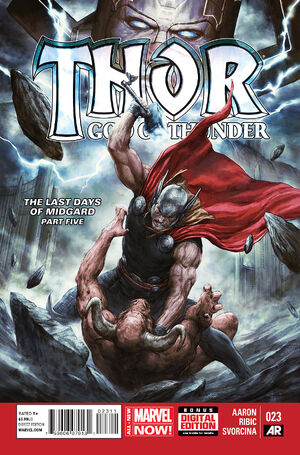 Appearing in "The Last Days of Midgard, Part Five of Five: Blood of the Earth"Edit

• Thor’s war to save the earth comes to its epic conclusion. In the far future, King Thor makes a dark decision that may save the day, but at what cost?

• And in present-day Broxton, Oklahoma, Thor makes a final stand against the forces of ROXXON, but not even a god can save everyone.

Retrieved from "https://heykidscomics.fandom.com/wiki/Thor:_God_of_Thunder_Vol_1_23?oldid=1464688"
Community content is available under CC-BY-SA unless otherwise noted.