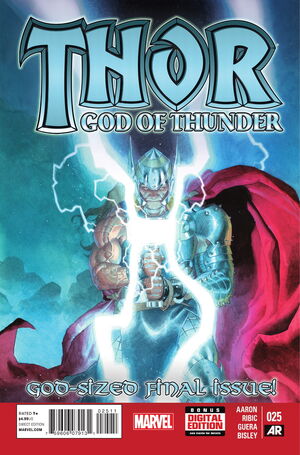 It was a time of a dark kings rising. Of new enemies with old ambitions. Of old enemies gaining new power. Of sins and sorrows. And surprises. It was time... For an All-New Thor. But not all would celebrate. It was a time of great change. A time when heroes fell. And worlds burned. A time of war and sacrifice. Of upheaval. Of cosmic decay. A time when even the greatest of all the Gods... was laid low.

Appearing in "Tales of Thunder"Edit

• The untold origin of Malekith the Accursed!

• King Thor’s granddaughters uncover a startling secret chapter from the history of the Thunder God!

• Thor deals with the shocking fall-out from ORIGINAL SIN!

Retrieved from "https://heykidscomics.fandom.com/wiki/Thor:_God_of_Thunder_Vol_1_25?oldid=1517218"
Community content is available under CC-BY-SA unless otherwise noted.