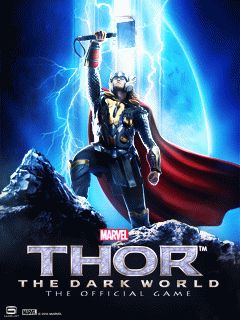 The Marauders attack Asgard as Odin sentences Loki and the Frost Giants after their attempted takeover of the realm, allowing the criminals to escape. Thor is able to fight off the invading Marauders and regroup with Heimdall, who informs the god of thunder that Fandral needs his help to protect the Dwarves from the Marauders. He heads to Nidvellir, and rescues Fandral from the Marauders' captivity. They learn from King Eitri that the Dark Elves have returned, and they want the Marauders to steal Uru weapons from the Furnaces of Nidavellir and free the monster Mangog. Thor and his allies make their way down to the Furnaces, where they face Mangog. Although the monster was defeated, the Marauders were able to escape with two Uru weapons - the Bloodaxe and the Sword of Torunn.

Thor returns to Asgard, where Heimdall tells him he sent Lady Sif to Jotunheim to retrieve the Bloodaxe. However, Heimdall sees that she had been captured by the Jotuns, and he sends Thor to Jotunheim to save her. In Jotunheim, Thor fights through combined forces of the Ice Giants and Dark Elves until he finds Sif. The two Asgardians learn that the Dark Elves do not plan to use the Uru weapons as intended but as part of a ritual. They successfully take the Bloodaxe back from the Dark Elves after they defeat the monster guarding it, the giant Ymir, and head back to Asgard with the weapon in tow.

Heimdall sends Thor to Vanaheim to recover the Sword of Torunn. When he arrives, he quickly runs into his old friend Hogun, who was already in the realm to protect the local Vanir from Marauder attacks. Although Hogun is puzzled by the nature of the attacks, Thor believes they are connected to the Dark Elves' plot. The two force the Dark Elves out of hiding once they defeat the Marauder Duhg, forcing Thor and Hogun to fight through the Elves and their remaining Marauder allies. After defeating a Kronan allied with the Marauders, the Asgardians are able to recover the Sword.

With all of the Uru weapons in Asgardian hands, Thor falls into a false sense of security; however, an army of Dark Elves led by Kurse attack Asgard soon after to retrieve them. With the help of Volstagg, Thor prevents the Elves from getting their hands on the weapons, and learns the truth behind the Dark Elves attacks - they are led by none other than Malekith, the infamous king of the Dark Elves who once threatened to destroy the universe, and the ritual involving the Uru weapons will do just that.

Strangely, Odin asks Thor to not seek out the Dark Elves and hand over Mjolnir. Thor has no option but to comply with his father's demands, but remains suspicious of his motives. Believing Odin to have somehow come under Malekith's spell, Thor seeks advice from Loki on what has happened. His former brother confirms Thor's fears that Odin is being controlled by the Dark Elves, so he frees Loki to help him take on their father. In return, Thor promises Loki that he will become king of Asgard. After fighting through waves of Einherjar, Thor and Loki defeat Odin and free him from Malekith's power, but it was too late. Odin had already sent the Bloodaxe and the Sword of Torunn to Svartalfheim.

Heimdall sends Thor and Loki to Svartalfheim in a desperate measure to stop Malekith from completing the ritual. However, when they arrive in the Dark Elves' home, Loki reveals he had been working with Malekith all along, and will be made king of Asgard after the Dark Elves destroy the rest of the universe. Thor fights his treacherous brother, giving Malekith enough time to almost complete the ritual. Once Loki is defeated, Malekith reveals that he planned to destroy Asgard with the other realms all along. Reunited by a common goal, Loki and Thor finish off Kurse, and Loki heads back to Asgard. As Thor fights through the rest of Malekith's forces, Loki convinces Odin to use his power to prevent Malekith from completing the ritual. The ritual fails, contorting Malekith's body into monstrous shapes. The deformed Malekith makes his last stand, and Thor puts an end to the mad Elf's plans once and for all.

Once he returns to Asgard, Loki - disguised as Odin - congratulates Thor on his victory.

The Cast of this Video Game is unknown.

Retrieved from "https://heykidscomics.fandom.com/wiki/Thor:_The_Dark_World_-_The_Official_Game?oldid=1616329"
Community content is available under CC-BY-SA unless otherwise noted.