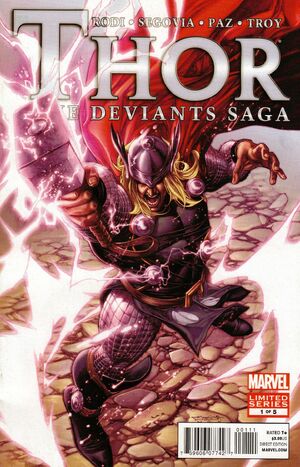 THE AGELESS ENEMIES OF THE ETERNALS TURN ON ASGARD! Beneath the ruins of Asgard, the Deviant villainess Ereshkigal seeks a mystic means of saving her race from extinction—and finds instead a weapon capable of dissolving all reality. With the Eternals who would oppose her mysteriously vanished, Thor stands alone to stop the entire Deviant race from dominating the world!

Retrieved from "https://heykidscomics.fandom.com/wiki/Thor:_The_Deviants_Saga_Vol_1_1?oldid=1651519"
Community content is available under CC-BY-SA unless otherwise noted.