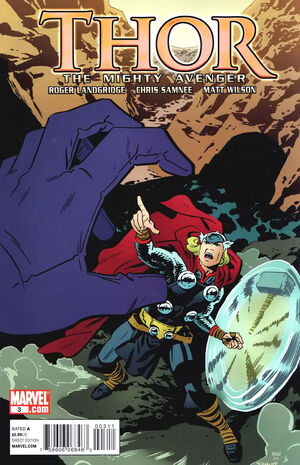 Appearing in "Here Be Giants"Edit

Synopsis for "Here Be Giants"Edit

Henry Pym remembers his mentor, Professor Stephens, when he gets word that he was murdered in a small town in Oklahoma. He and the Wasp go to investigate and see if they can locate his murderer. Meanwhile in Bergen, Thor gets a vision of Loki, who plants a spell in his head, then vanishes. Jane is fired from the museum for not having enough security. So she decides to take Thor shopping to cheer herself up, when Thor starts getting another headache, and begins having visions, see the newly arrived Giant Man as a Frost Giant instead. They fight back and forth, until Giant Man learns that Thor may be under some form of mind control. Giant Man tries to use his helmet to free Thor, but it doesn't work, and Thor knocks him unconscious, across the tracks of an oncoming train. Thor has a vision of his Asgardian friends, reminding him of his honor, and Thor stops the train from killing Giant Man. He then manages to free himself from the visions, and greets his new friends, and leaves on the arm of Jane.

Retrieved from "https://heykidscomics.fandom.com/wiki/Thor:_The_Mighty_Avenger_Vol_1_3?oldid=1464712"
Community content is available under CC-BY-SA unless otherwise noted.