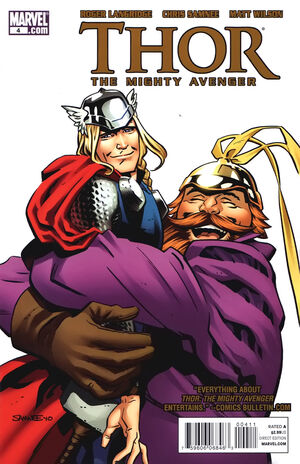 Blimey. We're only being invaded by Vikings...

ROAD TRIP TO NORWAY! The Warriors Three come to humble Thor on behalf of Odin. But Thor’s the God of Thunder, not directions, and a wrong turn of his goat-drawn carriage strands the Asgardians in jolly old Oxford…where Captain Britain says they are NOT wanted. It’s mighty Mjolnir vs. the stiffest upper lip in England!

Retrieved from "https://heykidscomics.fandom.com/wiki/Thor:_The_Mighty_Avenger_Vol_1_4?oldid=1464713"
Community content is available under CC-BY-SA unless otherwise noted.