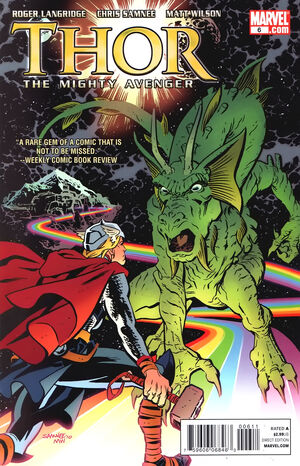 Thor discovers in the Bifrosticon given to him by Loki, a way to get to Asgard. He does so, but is stopped by Heimdall, who has his orders from Odin to keep him out of Asgard. Thor tries to force his way in, so Heimdall takes the form of Fin Fang Foom. Leaving, Thor takes Jane to Norway to show her the Northern Lights, and then does a bit of ice carving to form her likeness. After returning to her home, they finally share a kiss.

Retrieved from "https://heykidscomics.fandom.com/wiki/Thor:_The_Mighty_Avenger_Vol_1_6?oldid=1464715"
Community content is available under CC-BY-SA unless otherwise noted.