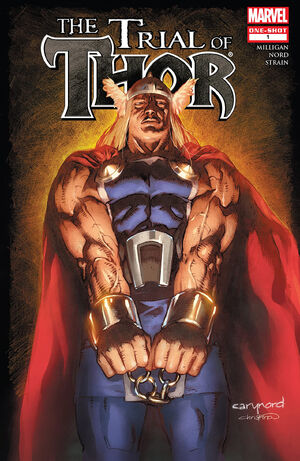 You have served me well. You have shown me beyond all doubt who the killer is. And for that I shall never forgive you. If I ever see your miserable faces again I will tear your entrails out. Go! Get out of my sight!

Appearing in "The Trial of Thor"Edit

Synopsis for "The Trial of Thor"Edit

On the Plains of Vanaheim, the Asgardians have been battling the Frost Giants for nine months. The Frost Giants finally retreat, when Thor appears and in front of Balder, begins killing Asgardians before leaving. Balder immediately goes to tell Odin, who dismisses what he says, telling him that his mind is addled by too much battle. That evening, funeral attendants begin preparing for the next day, when Elin sees a shadowy figure approaching them. Thor begins killing the women, with only Elin escaping. The next morning, Odin is viewing the bodies and summons the Warriors Three. He tells them that he wants the truth of what happened before three new suns. They go to talk to Elin, and she tells them that she saw Thor, clear as day, killing the others. Two days later, the Warriors Three return to Odin with what they've learned. They also bring in Finn, who tells Odin that he examined the bodies and discovered that they were killed with a weapon made of pure uru. Odin tells them that's not what he wanted to hear, and to get out. In a tavern in Asgard, Thor is approached by Balder, Tyr, and others, to arrest Thor on the charges of murder and treason. He tries to fight them off, but is about to be pulled down, when the Warriors Three intervene and rescue him. They head north into the wastelands, where Hogun tells him that they know he's guilty, but helped him out of loyalty and gratitude. Thor heads out alone, and in frustration, smashes a rock with Mjolnir. After looking at it upon its return, he has an epiphany. He races back to the Warriors Three and shows them - Mjolnir is not pure. It is scarred with minor imperfections from years of battle and time. In Nidavellir, the Dwarves and Frost Giants are preparing for their attack of Asgard, their plan having worked. Unfortunately, Thor has figured it out and begins tearing through their ranks like a scythe through bloody corn. The Dwarves release their final weapon, a duplicate of Thor. A large dwarf that has been reared with one purpose only - to be exactly like Thor and to destroy him. They battle briefly, and Thor kills him without too much trouble.

Retrieved from "https://heykidscomics.fandom.com/wiki/Thor:_Trial_of_Thor_Vol_1_1?oldid=1464720"
Community content is available under CC-BY-SA unless otherwise noted.