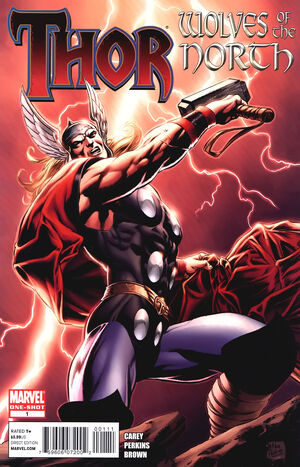 My lord, this may be a personal question - but can gods get rat-arsed drunk?

Appearing in "Wolves of the North"Edit

An all new classic tale of Thor unchained by the hot creative combo of Mike Carey (X-MEN LEGACY) and Mike Perkins (THE STAND)!! Hela lays siege to Asgard, and demon hordes are loose on Earth. Weakened and alone, Thor must make a dangerous bargain with a mortal woman in order to launch a last assault on the forces of death and chaos - as his enemies were hoping he would. Valiant Vikings, grotesque goblins, and lascivious ladies—what more could any thunder god ask for?

Retrieved from "https://heykidscomics.fandom.com/wiki/Thor:_Wolves_of_the_North_Vol_1_1?oldid=1464721"
Community content is available under CC-BY-SA unless otherwise noted.