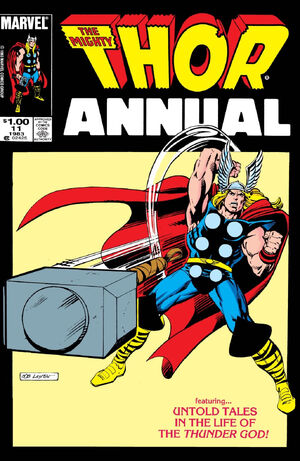 Appearing in "The Saga of Thor"Edit

Synopsis for "The Saga of Thor"Edit

The Norns, to celebrate Thor's birthday, look back to his past. It is revealed that Odin wanted a son with the power of heaven and earth, so he went to Jord and convinced her. When Thor was born, Odin returned to Asgard with him and Jord promised to keep the secret of who his mother is. In Asgard, Frigga promised to love and raise Thor as her own.

Retrieved from "https://heykidscomics.fandom.com/wiki/Thor_Annual_Vol_1_11?oldid=1463989"
Community content is available under CC-BY-SA unless otherwise noted.