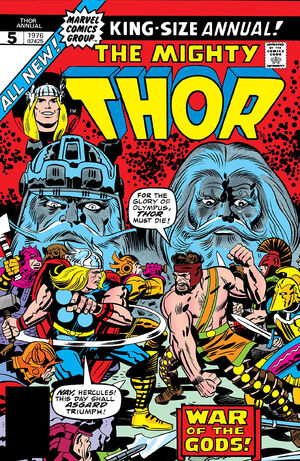 Appearing in "The War of the Gods!"Edit

Synopsis for "The War of the Gods!"Edit

We see this history of the Asgardian cosmology. Thor answers the call of some Vikings engaged in battle with some Greeks. But the Greeks call upon Hercules, and he and Thor clash. They battle for hours, and decide to continue in a weeks time with their entire armies at their side. Both Odin and Zeus do not want a war, but Loki impersonates Thor and goads the Olympians into action. When the smoke clears, the Asgardians have triumphed. But when Thor goes to look at the spoils, he finds Athens unfazed. Odin tells him that their followers sustain them, and they can no more conquer the Greeks then the Greeks can conquer them. As Thor storms off, Karnilla offers him a vision of his future - the Avengers.

Retrieved from "https://heykidscomics.fandom.com/wiki/Thor_Annual_Vol_1_5?oldid=1463977"
Community content is available under CC-BY-SA unless otherwise noted.