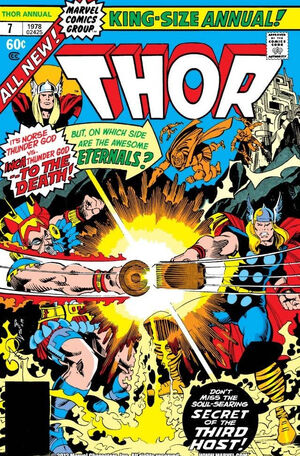 Strange! Though thou and I be Godlings born, we can see the Future no more clearly than do the Mortals who crawl the Earth below!

Appearing in "And Ever -- the Eternals!"Edit

Synopsis for "And Ever -- the Eternals!"Edit

As Odin sends Hermod to Hel to see if there's anything to be done to save Balder, Thor begins wandering. He eventually finds himself in front of Mimir. Mimir tells Thor of a time in the past, that has been blocked from his memory. Thor left Asgard for Midgard, and during his travels, met the Eternals and learned of the Deviants and Mutates. Thor also learned about the Celestials, but Valkin blocked his memories until now.

Retrieved from "https://heykidscomics.fandom.com/wiki/Thor_Annual_Vol_1_7?oldid=1463981"
Community content is available under CC-BY-SA unless otherwise noted.