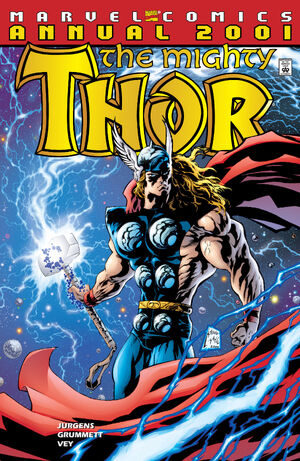 Appearing in "When Fall the Gods!"Edit

Synopsis for "When Fall the Gods!"Edit

Thor, the mighty God of Thunder, unites with his brothers-in-arms, the cybernetically and divinely empowered Beta Ray Bill and the Lion of Olympus himself, Hercules, for a journey like no other before it. Apart there are few obstacles that can stand before these heroes. Together they are a nigh-unstoppable force for good. But can even these three powerful forces for good survive an encounter with Desak, the Destroyer of Gods?

Retrieved from "https://heykidscomics.fandom.com/wiki/Thor_Annual_Vol_2_2001?oldid=1464014"
Community content is available under CC-BY-SA unless otherwise noted.