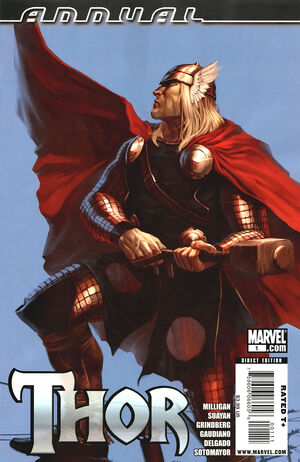 Appearing in "The Hand of Grog"Edit

The mighty Thor has been exiled from Asgard. Without his allies at his side, the wounded and isolated God of Thunder discovers that time does not heal all wounds…especially when it’s the Egyptian pantheon bearing the grudge!! Seth! Grog! The enemies from Thor’s past have returned…and they are howling for revenge, ready to exploit Thor’s misery and finish him off once and for all. Don’t miss this action-packed, Midgard-shattering annual! All this and a reprint of Journey Into Mystery #83 remastered with modern coloring!

Retrieved from "https://heykidscomics.fandom.com/wiki/Thor_Annual_Vol_3_1?oldid=1650574"
Community content is available under CC-BY-SA unless otherwise noted.