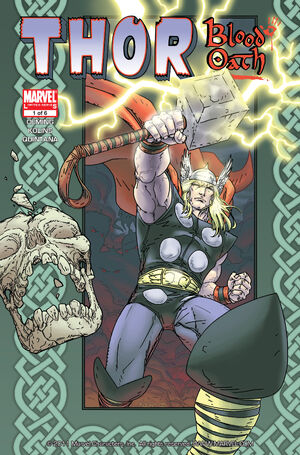 After a busy day of fighting the Absorbing Man as Thor and tending to patients as Donald Blake, Thor has a disturbing dream that causes him to awaken and head immediately for Asgard; There he finds Odin presiding over the Althing where the Warriors Three are being accused of murder by the giant Gnives; The Warriors went fishing and killed a giant sea beast who turned out to be Gnives' idiot son in disguise; In retribution, Gnives demands that five impossible feats be accomplished with failure meaning death for the Warriors; Thor and the Warriors accept the challenge.

Retrieved from "https://heykidscomics.fandom.com/wiki/Thor_Blood_Oath_Vol_1_1?oldid=1754388"
Community content is available under CC-BY-SA unless otherwise noted.