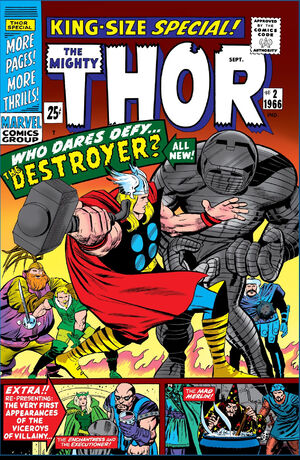 Appearing in "If Asgard Falls.."Edit

Synopsis for "If Asgard Falls.."Edit

Thor overheard a shore crew state that they are unloading the sarcophagus of the legendary Merlin. He wonders what it would be like if Merlin were alive today. Then entering his office window, Thor returns to his identity of Dr Don Blake. He emerges from his office to be scolded by his nurse Jane Foster because he has been ignoring his patients for over an hour. He can not tell her he was busy saving a busload of people who fell off a bridge into the river.

At the museum, Merlin's sarcophagus is opened to reveal his body still in perfect condition. As soon as the workers leave, Merlin awakens and recalls how he use to use his mutant powers of telepathy, levitation and teleportation to fake magic. Reading a newspaper he learns of missile test at Cape D'or and uses his powers to send the missile off course.

Alerted by a radio broadcast, Thor arrives and corrects the missile's course. He then goes to Asgard to see if the imprisoned Loki is behind the mishap. Loki reveals that Merlin is the one responsible. Thor heads to the museum to check out Loki's claim.

But Merlin has teleported himself to Washington DC, where enters the White House to try to take the country from President Kennedy. Thor arrives, and a battle follows with Merlin using the Washington Monument as a super-lance and animated the statue from the Lincoln Memorial.

Their powers evenly matched, Thor decides to take a gamble. He strikes his hammer, returning to the form of Blake. He then convinces Merlin that he is a shape shifter and able to became thousands of more powerful forms. He orders Merlin to return to his sarcophagus for another 1000 years.

Appearing in "The Enchantress and the Executioner!"Edit

Synopsis for "The Enchantress and the Executioner!"Edit

Reprints "The Enchantress and the Executioner!" from Journey Into Mystery #103

Thor arrives back in 20th century New York from his trip to the future. Exhausted, he returns to his medical office and transforms back into Dr. Don Blake. Jane Foster, Blake's nurse, arrives for work moments later, and leads him to the couch for a nap. As he sleeps, he dreams of his recent battle with the Tomorrow Man.

In Asgard, Odin complains that he is unable to drive the love for Jane Foster out of Thor's heart. Seeing an opportunity, Loki comes up with a plan to win Thor away with someone more desirable. He enlists the aid of the Asgardian goddess Amora, called the Enchantress.

Once on Earth, her great beauty captures any men who see her. Arriving at Blake's office, she tricks him into kissing her so that Jane will see it. Jane leaves, slamming the door behind her, and Blake follows.

Realizing she has failed to capture Thor's affection, Amora returns to Asgard and enlists the aid of the Executioner, Skurge. She orders the giant warrior, who is in love with her, to find and exile Jane.

Having gone to Jane's apartment and found her gone, Blake reverts to Thor and heads to the police commissioner's ofice. There he learns that the Executioner is rampaging through the city, and sets off to stop him. Meanwhile Skurge has found Jane, and uses the power of his axe to open an interdimensional doorway and banish her to a misty, shadowy Limbo.

Thor arrives and the Executioner offers to return Jane to Earth in exchange for Thor's hammer. Thor agrees, and Jane is freed. But when Skurge attempts to lift the hammer, he can not because of the enchantment that is on it. Suddenly his limbs begin to transform into wooden branches.

Seeing his betrayal, the Enchantress turns the Executioner partially into a tree. She then tries to use her magic to transform Thor's hammer into a serpent. But her magic is unable to defeat the mystic protection Odin has placed on the hammer. Using the hammer, Thor creates a vortex which carries both Amora and Skurge back to Asgard.

Thor then sees Jane, and, as Blake, joins her. From Asgard, an angry Odin vows that Thor will no longer defy him, and that he must act now against his son.

Retrieved from "https://heykidscomics.fandom.com/wiki/Thor_King-Size_Special_Vol_1_2?oldid=1694931"
Community content is available under CC-BY-SA unless otherwise noted.