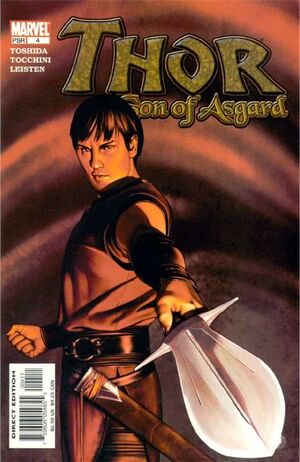 Appearing in "The Jaws of Jennia"Edit

Synopsis for "The Jaws of Jennia"Edit

Thor, Balder, and Sif are resting by a pool, while Loki watches. He tries to cause more mischief, but fails. The three friends find their way to the Mines of Jennia to retrieve one of the jewels and are attacked by the Jennia, small creatures that feed on emotions. Loki is trapped too, but he is rescued by Karnilla, who has been watching them the whole time.

Retrieved from "https://heykidscomics.fandom.com/wiki/Thor_Son_of_Asgard_Vol_1_4?oldid=1464062"
Community content is available under CC-BY-SA unless otherwise noted.